And here’s your chance to contribute to our picture archive, by identifying some of Karel Stoel’s pictures from  the period 1900-1970.    They have already been entered to the Netherlands chapter, for all to see, and are marked with the ‘q’ which shows we need more information.

2.   2 RNZN  —  This is KS’ sketch of a plate seen in Holland between 1940 and 1950.    Is it a representative of an Allied power such as the New Zealand navy, working on co-op recovery operations in the immediate aftermath of the war ?

3  —  During the occupation of Holland in the early 1940’s, Dutch army plates changed to black on orange, and used numerals only on cars, H on motorcycles and some special prefixes for ‘offline’ functions.   Many vehicles were commandeered from civilians and re-registered in the army series.     This Packard 11201 could have been one.

(From 1906-40, military vehicles in the Netherlands  had been registered in the standard civilian series.) 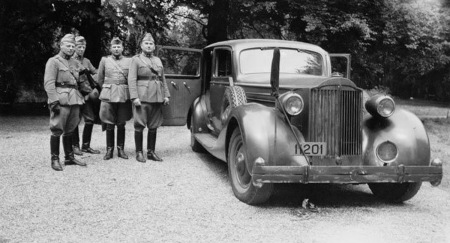 3a.  —  11235 is thought to be a normal 5-numeral post-war Dutch military issue, with the smaller 2040  indicating the Division or Regiment.   What make and model is the car?

3b.  M 421014  —  From 1945, some military vehicles in Holland used white-on-dark, M-prefixed plates and these were sometimes painted on to the body of the vehicle.     However, they used more than five numerals, and we have evidence here of 6-digit and 7-digit plates.     Were they for foreign forces in Holland during the immediate post-war period?     6-numeral  painted example below (on a pretty tired-looking old car):

4a.  —  While we are in 1945-6 Holland, we see the abbreviation CNF on the vehicles of the Commander of Netherlands Forces’ fleet, displayed as a supplementary sign to the civilian OR military registration. 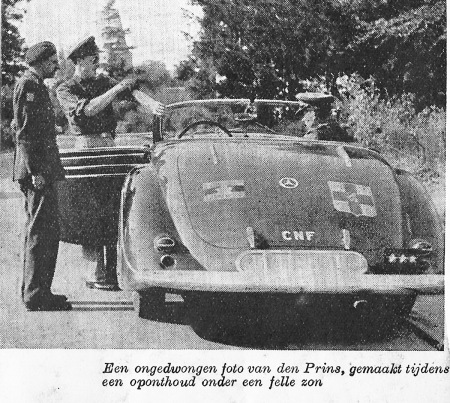 6.  —  It seems that as Holland became free, vehicle owners were able to make up celebratory plates, to use until the national system started to to work again at the registration offices.       Stoel sketched some of those he saw – at least that’s what we BELIEVE we have here:

7.  —  There is no evidence that province code L (Utrecht) issued tw0-letter codes, as did North and South Holland provinces from 1928.    But Stoel presents us with LZ-319 on an Austin coach – what else could it be?? 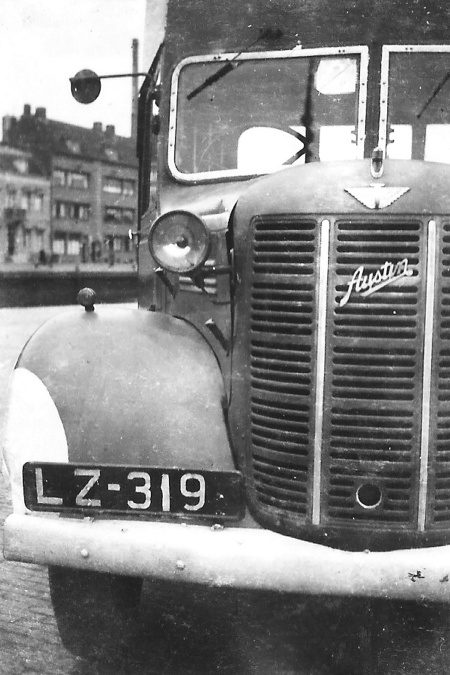 8.  —  And finally (for now) Jim Fox has another, more recent NL puzzler for our clever members to identify – US-8-CG:

You may send your answers via the Comments section of the Blog, or email them to

where they will be gratefully received.

Have YOU any early pictures  (pre-1975) of rare or unusual world plates which you would like to see entered to our historic plate Archive?      Even single photos or slides are considered valuable, both for the preservation of the images for posterity, and for the pleasure of the visitors to this unique collection.  Your entries are marked with your identification initials and any physical items returned to you by post, after scanning.        DO look some out for us all to relish!