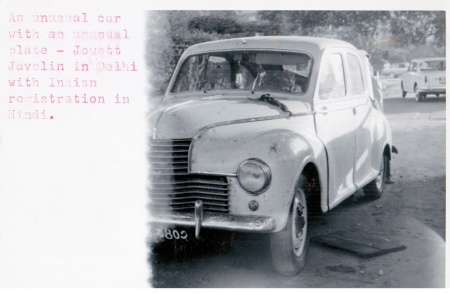 1965 Delhi sight of (part of) a Hindi-scripted plate – uncommon at that time.#

In support of a member’s sighting of an Indian Jeep in London in the 1950s, bearing Hindi scripted plates, we see another example in 1965 New Delhi, snapped just as a camera came to the end of a roll of film.    The Jowett Javelin was quite a rare car in Britain, using a flat-four water-cooled engine and many advanced features.     It would have been very difficult indeed to keep a 1951 car like this, still running in India in ’65!

The sight of an Indian car in Britain was – and remains – a rarity.     Of the handful I saw, royal household red plate with silver letters  ‘PALITANA 1’  was on a red Ford Mustang belonging to Prince Shiv and was shown in the Daily Mail circa 1957, though no photo by me.    This Hillman Minx however was captured in Plymouth one day in 1964 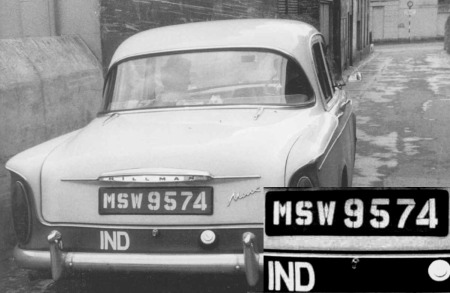 and a Bihar-registered early Rolls-Royce in a London mews: 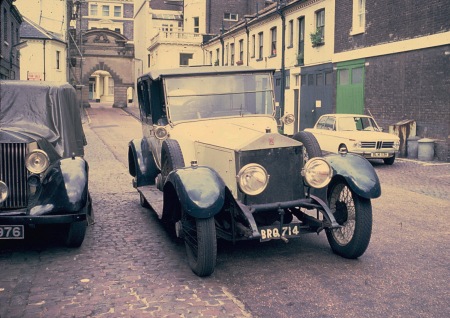 BRQ 714 – one of the last grand cars to be permitted to leave India for international collections.

and a type never reported before or since, seen in Earls Court, London, in the 1960s, using West Bengal plates in white on red and marked with (TRYP). 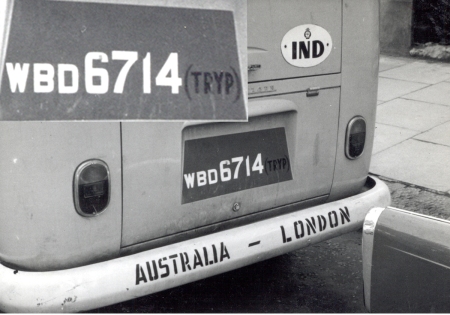 I have concluded that an Australian overlanding team was arriving by ship at Calcutta  (WB was for West Bengal until 1973) and was required by the customs at port of arrival to mount temporary transit plates, perhaps because they could not show documentation proving paid-up overseas licencing.   (Bad luck!)   They might have had to buy a carnet to transit India and the abbreviation TRYP on a red numberplate (rear only)  might have indicated the temporary nature of the registration.   It was all painted in the exact style of the period, the letters shorter that the numerals…..

The only red plates in India then were those of the princely states’  ‘royal family’  and the trade plates for dealers, of which DLH 267 M appears in RPWO/India/Historical Notes http://europlate.org.uk/countries/hai-kyr/ind/ind-hist.htm

This entry was posted on Sunday, December 30th, 2012 at 11:53 pm and is filed under Historic, INDIA, Temporary Importation, vanity/special issue. You can follow any responses to this entry through the RSS 2.0 feed. You can leave a response, or trackback from your own site.