Senior Europlate member Bernt Larsson has passed some of his less distinct photographs and negatives to his computer-skilled colleague, Antonio, who can ‘make something out of nothing’, we are told!      Well, Antonion has ‘raised this rare plate from the dead’ and we are so lucky to now see a Soviet sector Berlin plate in its natural milieu, mounted on an early Benz 180, dated 1961.

Bernt’s introduction to the picture follows:

In July 1961 I paid a visit to East Germany and, when I was driving around East Berlin in my 1958 black Volkswagen with Swedish registration plates “B 68679” and an “S” oval  I suddenly saw a Mercedes-Benz car with rare French Military Mission plates parked in the opposite direction with people inside. I rapidly turned around and stopped just behind that car. I searched for my old camera and jumped out of my car. My shadow is there on the photo confirming, how close I was. I did not even notice, that the lady passenger in the car turned and looked at me. My priority was the plate. At that time I did not have a camera with zoom, so I had to get close. Once having taken the photo I jumped into my car, turned around and headed for Checkpoint Charlie returning to the American Sector. A few weeks later the People´s Army of the East German Republic started building the Berlin Wall, and I would have felt much more nervous. Now this is one of my plate adventures, which I have recovered thanks to the magic work of my friend Antonio Barragan, who has rescued that old and faded negative. 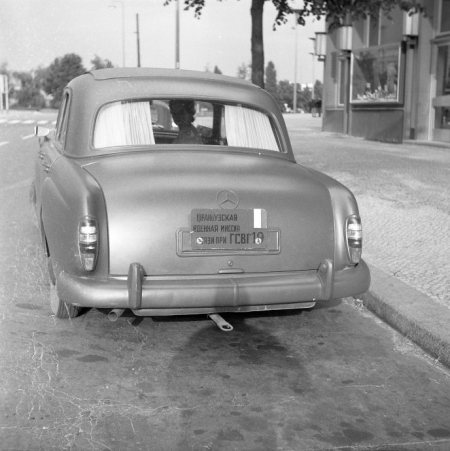 The Blog hopes this will be the first of many vintage plate pictures from Bernt’s albums – thanks indeed!

Bernt, through Placamundi, our Spanish section is now working on some fascinating historic research, with Thierry and Alex, which we shall have a chance to see as the documents become ready for release.   The first, Blog hears, is to be the history of the International Oval carried on the rear of cars travelling outside their own jurisdictions.    March 2013.

This entry was posted on Sunday, March 3rd, 2013 at 9:51 am and is filed under Germany-Berlin, Historic, Larsson, Military. You can follow any responses to this entry through the RSS 2.0 feed. You can leave a response, or trackback from your own site.