Non-member collector André Mas has been hoarding odd items most of his life and amongst other things, has accumulated a prodigious collection of rare numberplates which the writer photographed in France 06 a few years ago.    André  had found a rare Citroen DS21 Déesse Décapotable rotting in a yard in Djibouti whilst he worked there and he determined to repatriate it for restoration in UK.

It continued to sport it’s Djibouti État registration E 43.    He found that it had been brought to the French territory as a conveyance for President de Gaulle’s official visit and had been fitted with a sturdy balance rail across the rear passenger well, to stabilise the tall general, should a rebel chase ensue around the backstreets of Djibouti Town.      It was André who obtained/had made the international oval DJI – perhaps the only one in existence?    Ever? 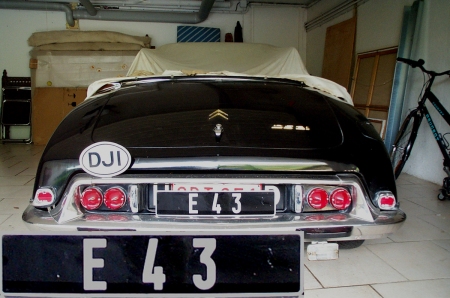 The restored Citroen E 43, by then registered in Belgium; with the unique DJI oval. Brumby archive

This Djibouti Page begs some questions:

Has any member, or known source, a picture of the French Somaliland colonial plates which preceded independence in 1967?

And pictures from the 1967-77 period when it was titled the Territoire Francaise des Affars et Issas?

plates André brought back from his tour there?: 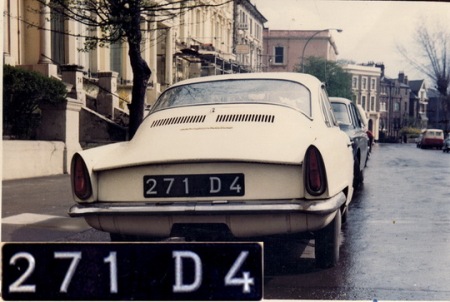 The only Djibouti ever seen by the writer was this little NSU Prinz coupe, in London in the early 1960s, the ‘4’ in its 271 D 4 registration indicating 1964 validity.     Brumby archive

But member Ivan ‘Nip’ Thornley saw an Austin 1800 in Northamptonshire (GB) in the late 1970s, carrying handsome, British-made, Djibouti, CD plates,             15 CMD 1 !      Nowadays embassy 15 is China, and I doubt whether GB has any diplomatic link with Djibouti.    It would seem from the car model and location of sighting, that once, 15 had been for the GB embassy.      The country became independent of France in 1977, so the Djibouti CD series would not have appeared until after that.        Thornley archive

Djibouti was the subject of my most costly contribution to my hobby.     Deciding to go somewhere really unusual for a week or so in the 1980s, and knowing an exec. in a hotel group, I picked the former French Somaliland, where he ran a grand pension in which he granted me a room.     It may have been the only building in Djibouti with more than one floor.      Travelling via the French third-world aerodrome of Le Bourget, from London, my flight touched down at midnight in the North Sahara, and I was one of four westerners on a flight carrying about 20 people.      The locals melted away into the hot night, with no visible checks through customs or immigration but we Euros were challenged for our visas.     I had established that no visa was required, before leaving London.     The other three Brits were old hands.    They worked for British Telecom, which maintained the Djibouti phone system, and were frequent visitors to fix equipment which was eternally being fiddled with by unknown hands.    Something untoward happened every time they tried to enter or leave and they were inured to procrastination.

In the francophone exchange which ensued, it transpired that foreigner visa requirements had changed in the previous weeks/months, but the team of  former cameleers eventually admitted that since the change of rules, they had not yet been able to afford to advise The World At Large of the changes.    Naturally, The Rule still applied, however – the prophet be praised.    Our techmen demanded to speak to their special mate, the Minister of Telecomms, who would spring them from that dusty, hot  tent – along with me, whom they had now kindly decided to adopted as their bag-carrier/general factotem.   I would be borne through under their general laissez-passer.

The Minister was run to ground under some ladies in the Tin Palm Nite Club at 2 a.m. and BT hailed him familiarly as ‘Jacko’ as he sportingly took the telephone call with his free hand.     Having heard their problem described, he told them to pass their phone to his mate, the chief of customs and immigration, the official with the least grubby blanket swathing him from head to dusty foot.    A noisy one-way tirade took place at the ear-piece, after which an embarrassed ‘Welcome to Djibouti’ was profferred to the technicians by the assembled group of customs and immigration bods, who, on reflection, did rather look to be out of it on Qat, their sharia-cleared drug of choice..

They were not convinced that I had the credentials to climb telegraph poles, however, and despite the protests of the might of  BT,  I was held back for private interview.      Failing to recognise the encouraging signals emitted by third-world power-brokers, I was eventually formally refused entry at 0300 and told to go back out on the returning morning flight, and come again with a visa some time.

Predictably, I never went back, and I never got even one photograph of a Djibouti plate, though I did see a red TT plate with arabic on the tarmac tanker, when we were taxi-ing.      The French aircrew had all stayed a refreshing night at the same grand hotel to which I had been bound, and were amused at my plight.     I think I was the only departing passenger on UTA from the Horn that dawn.

It was in the pub that night, back in Buckinghamshire, recalling my wasted couple of days, that everybody asked “Why didn’t you just give them baksheesh??” and I had to lamely reply that it simply hadn’t crossed my mind!     I haven’t lived in the corrupt zones of the world, and am not really fit to travel in them, I now realise.    OF COURSE, a ‘dash’ would have let me in – and now I divine the hidden meanings of their strange and oblique questions as they fruitlessly tried to  lead me to the fulchrum point of the moral see-saw in that hadean aerodrome tent.

A waste of a thousand pounds, as I recall!       Though I did get some new mosquito types for my collection and I wasn’t bundled in to the Foreign Legion, so there was much to be thankful for.

(Tanganyika was another costly brush with the ‘law’ – a word without meaning in the Dark Continent.)

This entry was posted on Monday, April 8th, 2013 at 1:27 am and is filed under Africa, Diplomatic, Djibouti, Historic, Temporary Importation. You can follow any responses to this entry through the RSS 2.0 feed. You can leave a response, or trackback from your own site.