May 1 MALAYSIA UPDATE and NOTES ON SUFFIXES

The use of a suffix serial letter has now been adopted by mainland Malaysia, though only in Kuala Lumpur Wilaya at present, to further extend the life of its longstanding LLL nnnn format, which has run there since 1971.

April 2014 saw the first of the W suffixes for the Wilaya of Kuala Lumpur.
Vic Brumby 2014 via Dominique

Langkawi is guessed to be now at around suffix N.         More registrations are used here than the island warrants, because it is a duty-free zone and mainland Malaysians like to buy expensive new cars there tax-free, to use elsewhere; this ‘off-shoring’  greatly inflates the KV figures.      Perhaps this will be stopped one day, but meanwhile a rich man from Johore, for example, can save  US$100,ooo on a new  Lamborghini/Bentley, by avoiding the heavy luxury-car tax of the mainland.

This owner saved a bundle by registering in tax-free Langkawi.

Sarawak began to issue  a Q suffix to its plates around 1991 (validation needed), to separate its regional codes from those of  Peninsular Malaysia and from those of Sabah, which overlapped each other with district codes J, K, T, A, D, M and B.   Between 1991 and 1993, owners had to have added a suffix ‘Q’ to their pre-1991 plates or stop using the vehicle.

The Q suffix attached to Sarawak plates from c.1991 on. In this case, that ‘Q’ would distinguish between this B for Sarawak’s 2nd Division (Sri Aman) and B for Malaya’s Selangor State. Brumby archive 2009

Since the unification of Peninsular Malaya and the two Borneo territories in 1963, forming Malaysia,  K 2345 from Kuching  (Sarawak) could park next to K 2345 from Kedah (Malaya) and K 2345 from Kudat (Sabah-former British North Borneo)!    Officially, the international oval for them all became MAL.

At least, before those times, the Sarawak one would have carried an SK international oval and the Sabahan one, an SNB (1938-55)  oval or a CNB oval (1955-63).    Neither of these ovals has ever been photographed (unless YOU know different!)

Examples of the confused state of the combined Malaysia from 1963….. 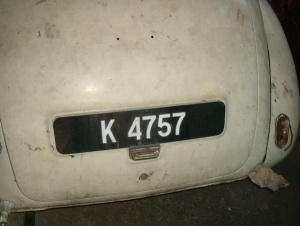 CNB  —  This was originally K 314 from Kudat, Sabah/Colony of North Borneo, before the new law required a suffix ‘S’ to be added to avoid confusion with the Malayan and Sarawak  K’s.         VB archive

However, as so few vehicles moved between the territories in those times, it took the various authorities some long time to recognise the situation.  About 1967,  they added  E as a prefix for new registrations in Sabah (for East Malaysia)  (about 1967). and at unknown later date, added an S suffix to existing plates.     This is a complicated time in Sabah plate history and remains to be correctly, precisely dated.

East Malaysia (part of which is Sabah – formerly British North Borneo) inserted a leading ‘E’ to distinguish a Jesselton J registration from that of a mainland Johore J vehicle.   EJ  2053 possibly from 1967.    Brumby archive

Later in Sabah, the E prefix was dropped and an ‘S’ prefix was added to differentiate  its regional codes J, K, T, A, D, M, and B from the identical Mainland/Sarawak/Singapore codes: (Jesselton/Johore(J),  Kudat/Kedah/Kuching(K), Tawau/Trengganu(T), Kota Kinabulu/Perak(A), Tawau/Kelantan(D), Malacca /Miri(M), and Beaufort/Selangor(B).

Unlike the Langkawi series, the Q and S suffixes in the Bornean states were not serial letters, however, and are mentioned only because they were a stage in the change to serial suffixes now in use in both the Bornean ‘countries’, starting with the two capital towns, which register the most vehicles and so lead any system changes.

Now has come the turn of the first Malaysian mainland registration authority to exhaust its LLLnnnn series, and commence a serial suffix.    Kuala Lumpur capital city (titled a ‘Wilaya’, or autonomous region)  used up its  codes  WA-WY 1 – 9999 – then WAA -WYY 1-9999 – and commenced W 1-9999 A in September 2013.    (W 1-9999 without suffix wasn’t employed, W having once been allocated to Province Wellesley, the mainland section of modern Penang, which only issued W from 1948-57.)      Unbelievably, it is actually possible to obtain a W plate of that Wellesley series from the authorities, for lots of money, and thus sport a most unusual vanity plate!    (From a territory of which most modern Malaysians would know ever existed.)

Remarkably, WA 1-9999 A is expected to start in May or June 2014, indicating the volume of new registrations of all vehicles at over 200,00o in 9 months.   There are also local taxis which carry a different plate type, and so are not counted in that figure.

The majority of this run on new registrations is taken up by light motorcycles.   In just one day recently, the Transport Dept. registered 1000 new numbers.   Predictably, and despite an excellent urban highway system, the city often gridlocks.

‘Distance’  Taxis,  licenced to drive out-of-state, use registrations from the normal series, but made in black on white.   So far, not many seem to have been registered since Sept. 2013, as a serious hunt for some weeks, produced only one sighting, depicted here for the first time: 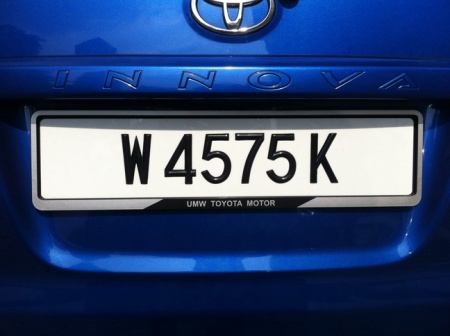 This entry was posted on Thursday, May 1st, 2014 at 5:10 pm and is filed under Borneo, Malaysia, Sabah, Sarawak. You can follow any responses to this entry through the RSS 2.0 feed. You can leave a response, or trackback from your own site.