Alastair C., a pal who enjoys rallying old cars in unusual places has caught the bug of plate-collecting, due to over-long exposure to your editor in bars and over dinner-tables.    In 2016 he returned from Bhutan having somehow persuaded someone to let him take one of their colourful plates home, which he presented to me at the Red Lion Inn at Coleshill, GB.

In 2009, he rode his Ducati(!) motorcycle to Senegal with some biker friends and collected a few mementos: 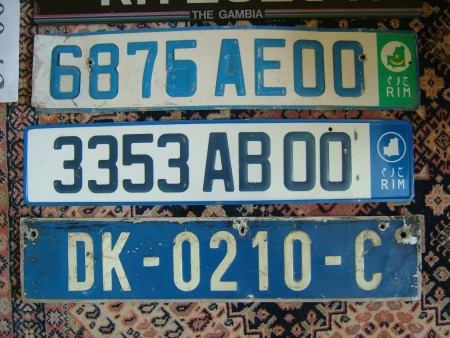 I asked him how he transported them, on a motor-bike, from West Africa to Maidenhead, where he lives and keeps the dozen varying vehicle types with which he pursues his hobby of world motoring.    He replied, nonchalantly “Strapped ’em to me handlebars, old boy”.   Across the Sahara???    Past African border officials????    On a 2-wheeled, unstable conveyance????

Yes – well, I should have known better than to ask.

At present, that worthy has just finished the Haka Rally in New Zealand, for which he used his Rolls-Royce Silver Cloud – and that was with

his (Kiwi) 99-year-old mother Dorothy, who frequently accompanies him as navigator (she is now in the Guinness Book of Records as the World’s Eldest Navigator).

The 2014 photo was taken in Mandalay by Australian friends visiting Burma and who saw Alastair’s Rolls parked-up during the lunch-hour, whilst he was on another rally!

Aussies Sue and Peter White took the photo to send to me for interest, and they  “spoke for a while with the owner”,  but no-one discovered that they had a mutual friend in England until I put 2 and 2 together weeks later, after receiving this picture!

From a rally intended to take place in Cuba came this photo of repainted plates, which stallholders in Havana habitually prepare to sell to visitors as a memento of the island with The Worst Food In The World.     When the ship carrying the rally cars arrived at Port Havana, the authorities decided to blackmail the rally organisers by refusing entry for the cars unless an arbitrary and significant bribe was offered.    The organisers declined the invitation, by agreement with the  competitors and as a result, the containers full of rare cars never left the ship and were returned to Europe unopened.  The bankrupt country didn’t get either the bribe or the good deal of money which would have been spent by the rally crews.      They have much to learn. 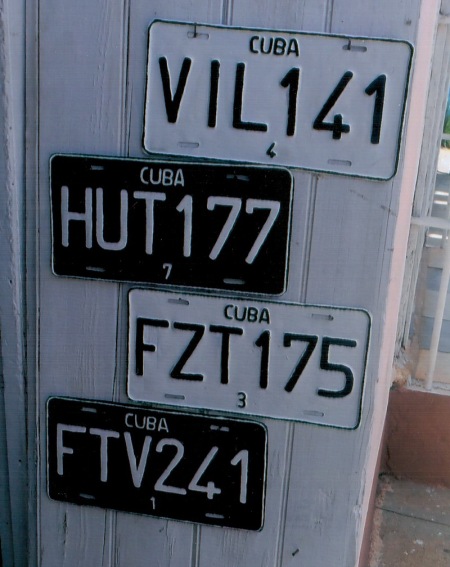 < This period of Cuban plate is now over and every vehicle except some government and military departments have been obliged to re-plate with the new German-style below;

This entry was posted on Friday, February 24th, 2017 at 4:18 am and is filed under Cuba, Gambia, Mauretania, Senegal. You can follow any responses to this entry through the RSS 2.0 feed. You can leave a response, or trackback from your own site.