Is there a new Italian type?

Victor Brumby in Italy in September 2012.

I followed a tractor and trailer in the countryside at dusk near Orvieto last week, which had both tractor and trailer plates in medium BLUE on yellow, not black on yellow as usual.     The trailer carried the same registration as the tractor (which I seem to have lost!), but had the red ‘R’   for Remorque (trailer).  These were both pressed plates, not painted.      It was too dark to take a photo, and indeed, my Italian would have been inadequate to explain to the rustic worthy who piloted the machine, the bizarre concept of xenoautonumerology – and his part in extending the boundaries of the science.    In other words, I couldn’t stop him, explain and photograph.    BUT – I DID follow him for about 6 kilometres before giving up.

Days later, I saw another blue on yellow tractor plate, that time without my camera (I am too old to use a smart-phone with built-in film unit) and the system was identical.     However, most of the many other ag. tractors and trailers I saw were as we usually expect, viz: black on yellow.

I await a response from out Italian pals, who may know of this type.

March 2014……Well –  no-one else  has reported this blue/yellow ag. plate AND I have been back to Umbria to search for it, during 2013 – so I must explain my faulty experience by reference to one or more of the Italian beers which I enjoy before I go spotting in the Republic!

Moroni, Moretti and Magneto Marelli can all share the blame!!

BC 418T – Normal agricultural tractor series since 1999. No regional identifier. 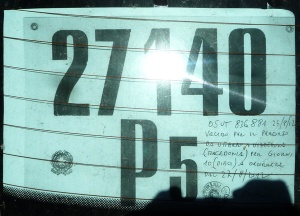 P5 is the regional code for Viterbo interim plates, used on this Fiat awaiting technical approval. 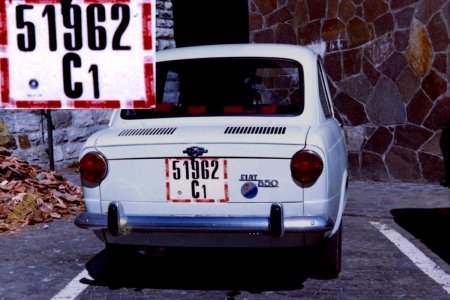 RPWO mentions that personalised Dealer plates are permitted, which explains this oddity, seen at the customs yard at the Adriatic port of  Ancona.     Perhaps this dealer trades in importing and exporting vehicles?

In Trento, just before commencing the Brenner Pass into Austria, I paused for lunch (at an excellent Japanese restaurant – unusual for Italy!)  and found this this specially-plated Civil Defence 4wd with the TN code for Trento.

Trento is one of the three areas issuing these official Civil Defence PC plates, with Bolzano and Aosta.

An unusual DAF 33 belt-drive car from the 1960s was awaiting photography in Orvieto, bearing the old black series plates.       In amazing condition, and clearly the owners’ pride and joy. 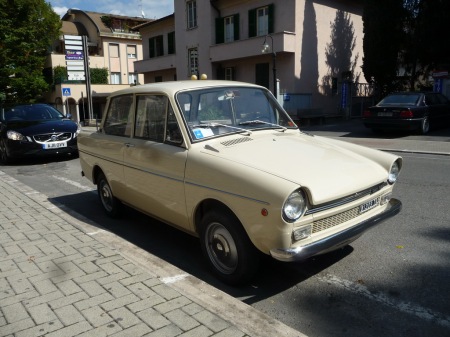 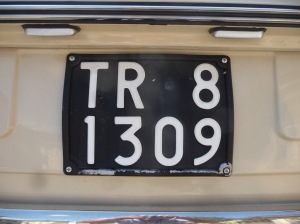 This entry was posted on Thursday, September 27th, 2012 at 3:05 pm and is filed under Dealer, Historic. You can follow any responses to this entry through the RSS 2.0 feed. You can leave a response, or trackback from your own site.

2 Responses to Is there a new Italian type?