Which Argentine series is it?

Seen in Buenos Aires in 1989, I never did find out what category of plate this was.     Any ideas?

This Argentine Dealer plate was an oddity – and what a great thing to see!   (see Comment)

Because Argentina made its plates so well in years gone by, many survive in excellent condition, as has this San Vicente enamel example from 1929.   I found it  in a massive old milk factory in which a man named Nestor Corsi made new Ford Model T’s out of original parts which he gathered in from farms all round Uruguay and Argentina.    He manufactured anything he couldn’t find, including any style and colour of body, and sold them all to collectors abroad, mostly in USA and Switzerland, he told me.

It used to be at least twice a year we would see Argentine cars in London, during the 1960s.    Here is a Beetle near Putney, as always in  those times, carrying an international oval!

Cordoba-registered VW in London in 1968. 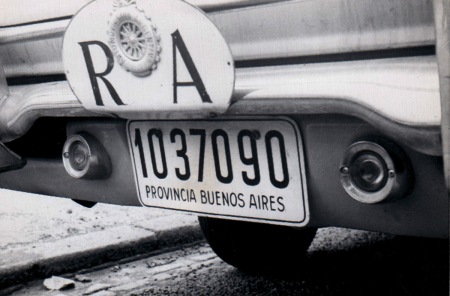 And a big American car of the period, from province of Buenos Aires, rather than from the city area.   It displays the usual very large RA oval which owners obtained from the Automobile Club of Argentina, as witness their shield.  Seen in Kensington, 1960s.

The oddest Argentine sighting for me was a 1920’s car bumbling along the road from Kuching to Lundu in Sarawak, in January 2011!     It belongs to a family which is circumnavigating the world.    Their movements are documented in several sites, one of which is:

This entry was posted on Thursday, September 27th, 2012 at 5:57 pm and is filed under Argentina, Dealer, Historic. You can follow any responses to this entry through the RSS 2.0 feed. You can leave a response, or trackback from your own site.

4 Responses to Which Argentine series is it?