Roger Kimbell has returned from the island today with two nice shots for our delectation:

The British High Commissioner has a smart Land Rover Discovery with a cherished Dip. plate! 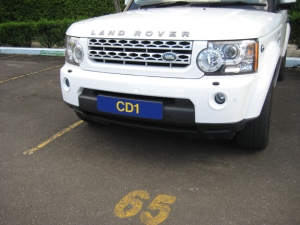 The four Windward islands seldom send cars off-island, and thus a sighting of an international oval WD/WG/WL/WV  is neccessarily rare.      The only photo of which I am aware is of this Mk. 2 Ford Cortina in Bayswater, London in the 1970s.    The owner must have visited the Automobile Association HQ in Leicester Square, and asked them to dig an adhesive plastic one out of a dusty drawer for him.

This entry was posted on Sunday, February 3rd, 2013 at 12:52 am and is filed under Consular, Diplomatic, St. Lucia WI, Windward Is.. You can follow any responses to this entry through the RSS 2.0 feed. You can leave a response, or trackback from your own site.