There will be a fuller account of the great period shots gathered by early founder-member  Gray, when time permits.     For now, just relish a few picked at random from his newly-digitalised photo transparency slides.

Soon after the Rolls-Royce Silver Shadow was launched about 1968, this Bahreini emir brought his new car to London. Gray archive 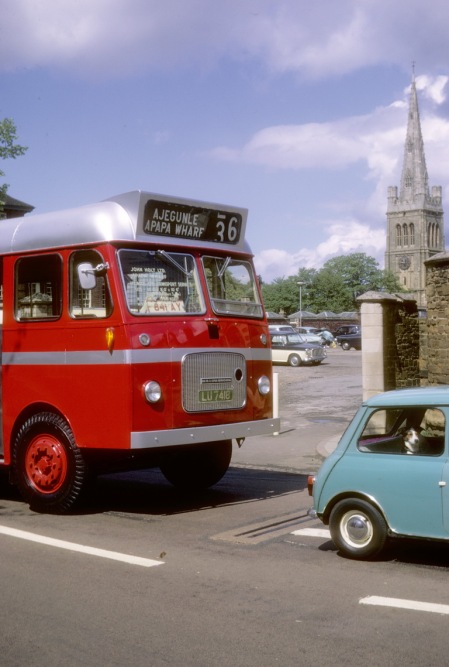 WAN Nigeria – LU 7416.    A batch of new  Willowbrook-bodied Leyland Comet buses passed through Kettering in the late 1960s in transit to London docks and their sea-passage to Nigeria.     Already plated for use with the Lagos City Transport Service, and using a green background not usually associated with WAN plates, they were running on Leicestershire AY trade plates.       (NOT Alderney!)            Gray Archive 1968c 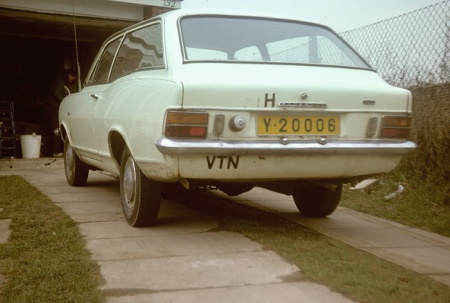 P.S.   I now learn from Ivan Thornley that the Vietnamese Vauxhall Y 20006 had not previously been registered in Hungary (H), but in Ethiopia (ETH)!     The owner had not finished removing his home-made IRC stickers.     (Those would have been fine plates to see on-car………)

Mowqati 673, an Afghan Foreigner (M and green) from Kabul ,on a Mercedes 190 in Britain did not escape TG’s eye or camera.    A very rare sight indeed.        The overseas-issued Automobile Association badge is of interest, but the country of origin crest is illegible.     Gray archive c.1972 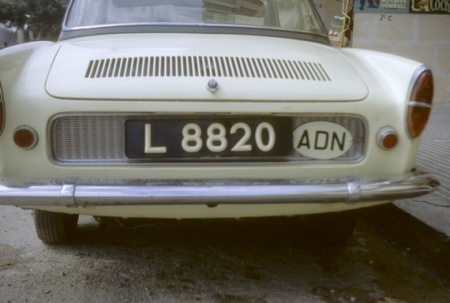 L 8829 ADEN     Aden was a moderately-frequent ‘spot’ in the 1960s, due to the active commercial and military establishments in that then-British colony.    Aden was administered from British India from the 1910s and employed the BI system, with code ADN.    Under later colonial administration, it changed in the 1950s, first to the prefix 2ADN, when, reaching 9999 again, L, then M and N became the leading letters used in the Aden Colony.   (No-one knows why those letters were chosen).    Independence and the later amalgamation with South Yemen closed down sightings and info from that hot zone, for many years after. The car is a French Renault Floride, seen in GB.       Gray archive. 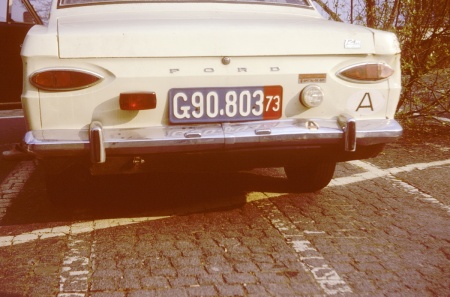 AUSTRIA FOREIGN RESIDENT/EXPORT SERIES.      Graz is the registration area for this German-built Ford Taunus 17M, photo’d in Austria in 1973 before leaving for its ultimate export destination.     Most European countries offered a facility to purchasers from abroad, to collect their new European car, tax-free, from factory or dealer, to tour Europe for up to 6 months and then return it to the supplier for shipment to their country of origin – or even drive it home themselves.     With their acquired mileage they could be imported to their home countries as second-hand cars, so that their local import duties would be lower.      Tens, if not hundreds  of thousands of vehicles were supplied under these tax-free schemes.        Gray archive.

May 2014 q.           Can anyone say whether this Austrian series was used both for export and for identifying foreigners who came to live in Austria for extended periods, perhaps even with tax-free status?    There have always been too many of them around to be only for vehicles awaiting export, it seems……..

2015  — marcellotaverna@alice.it writes:    The blue plates with a red dated band are called “temporary registration marks” and they are issued, on request, to “anyone not having his main residence, or legal seat or main facilities in Austria, upon exhibition of the required documents….”. Further “if the vehicle comes from abroad, a valid foreign approval document will be accepted”   It seems that these plates are issued to foreign persons or companies, both for export or for temporary import.

Some additions at Sept. 29th. – notes to add later 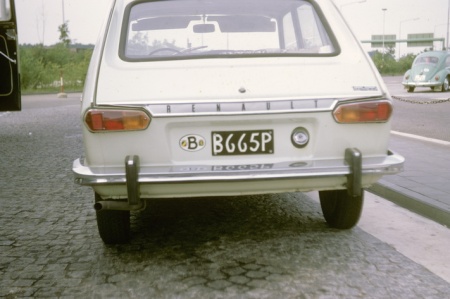 Sf 38-16  —  White plates were issued to privileged Party members in pre-democratic Bulgaria.     This fortunate citizen had a  Sofia-registered Renault Dauphine and was allowed a passport to travel to Monte Carlo, where this picture was taken by member Terry Gray in the 1960s.   The series used the Cyrillic alphabet and  ran from 1958-85. 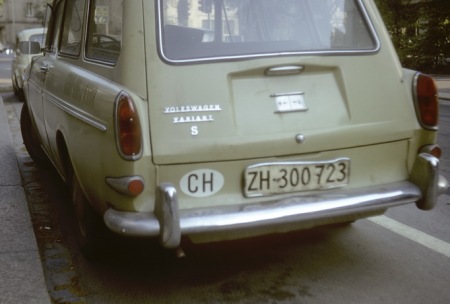 Remarkably, this MGB came to live in London for about a year in 1969, and remains the first and only sighting ever of a Colombian plate in England by Europlate.   Members Brumby, Thornley, Gray and Pemberton all reported it separately!   This is the 1967-74 series. 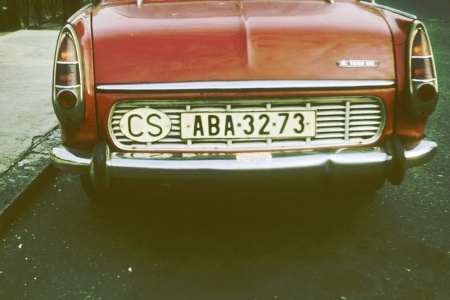 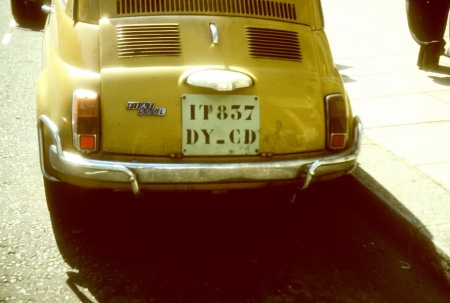 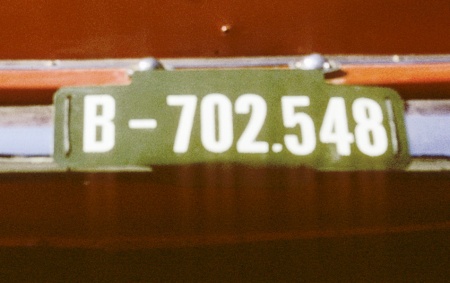 if YOU have prints or slides of early or rare plates which you would like scanned for your own use and for the pleasure of other members’ viewing, write or email to Victor Brumby (vicbrumby@gmail.com) – or make a comment in the  Comments Box at the foot of this page.

Well – which of us needs THIS identifying?

This entry was posted on Sunday, August 18th, 2013 at 5:46 pm and is filed under Aden, Africa, Afrique Occidentale Francaise, Austria, Bahrein, Nigeria, Venezuela, Viet Nam. You can follow any responses to this entry through the RSS 2.0 feed. You can leave a response, or trackback from your own site.