the Blog brings you a few of the extraordinary images which Karel Stoel amassed over 50 years.    This August 2018 Blog page refers to some unusual Trade Plates and related specials….. 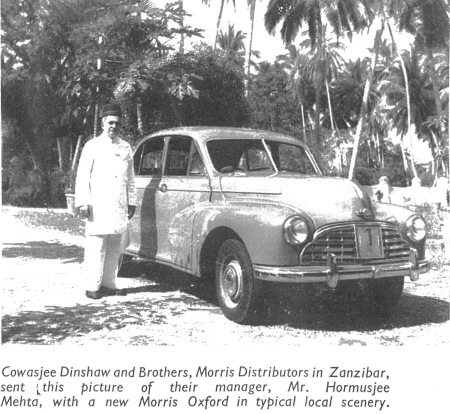 Previously unknown, a dealer plate on British Zanzibar in circa 1949 has a large number ‘1’ probably in red on a white ground, as it awaits its normal plates. RPWO archive

And while we’re in Zanzibar…….

(EAZ)  —  ZG 316 – Zanzibar Govt. – Who knew that the Zanzibar Government had its own issue?    ZG 316 is inspected by the army in the 1960s.   It’s on a Morris J4  minibus, surely an unsatisfactory model for the tough conditions of that unpaved island….

(ADN)–GEN 24 —  About 1951, a new Minx awaits permanent registration as it is collected from the docks in transit to the Hillman dealer.     We can guess that the plates are white on red, in the GB style. and that the ‘GEN’ abbreviates General (use), one of two dealer plate types used in Britain, the other being the Limited (use) type, which was red on white.

(ADN)–GEN 3 — A second example of that hitherto-unknown Aden plate type is seen on a Morris Oxford MO, sporting GEN 3.     Note the wide panel to accommodate the numberplate, pressed in to the boot panel, a feature formerly unknown to The Blog.   (export spec, mayhap?)

And another rarity from Aden … a taxi

and, below, an Aden QUIZ picture…help! 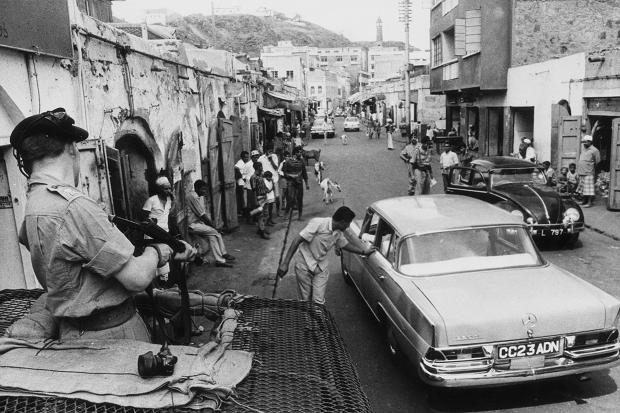 (ADN)  —  CC 23 ADN –  Has anyone any information on this Consular Corps series from the ’60’-70s?     Never reported, nor otherwise illustrated.     Yet this is CC issue 23, so there must have been consulates for more than one country in what was then a British colony and protectorate………

In 1968, a new Mazda awaits collection from the wharf, as one of the early Japanese cars to come to the island, where all Nipponese brands met with great success in the forthcoming years. 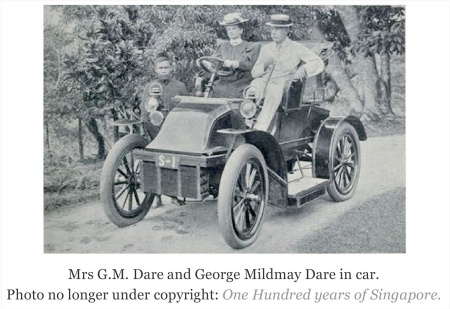 (SS) — S 1 Straits Settlements. Now we have unearthed the picture of Singapore’s first registration, from a history published by ‘Singapore Tatler‘ and given as 1904.              Lady Annie Dare’s 2-cylinder Star car, which she named ‘Ichiban’, but which was called ‘The Devil Wind Carriage’ by the astonished native people, was driven all over the Malay Peninsular and Java, before being returned to England and Scotland in later years.

That’s all for now – more to be added later.

Any comments are appreciated.    They indicate that someone reads these missives!   VB

No Costs,   No use of your memory, and the daily changes will show up seconds after they are made, so you will always be up-to-date!    DON’T DOWNLOAD unless you have a massive spare memory available – and remember – if you DO, that  your own download won’t receive the rolling updates/amendments……..

This entry was posted on Friday, August 24th, 2018 at 12:32 pm and is filed under Aden, Bahrein, Singapore, Uncategorized. You can follow any responses to this entry through the RSS 2.0 feed. You can leave a response, or trackback from your own site.