Use the new EUROPLATE BLOG (TEHA)

The Belgian Congo/DRC has one of the longest lists of different international ovals, starting with no ovals (no cars?) during the Leopold private ownership period (King Leopold’s Congo Free State 1855-1908) then adopting CB for the Belgian State-owned Congo Belgique until 1960.     There followed RCL, CGO, ZR and ZRE, to DRC today (in which the ‘D‘ amusingly abbreviates the concept ‘Democratic!’).   Some of the area codes overlapped.    This RCL was photographed in Cannes during the early 1970s by VB on that great Africa-favoured car, the Peugeot 404.      The front plate was a normal, yellow on blue, pressed  ?Howoco? plate, but the rear plate had been lost and replaced by this well-painted version.

Does the Consular Corps oval suggest that Congo had not established a special plate series for Consular in those years? 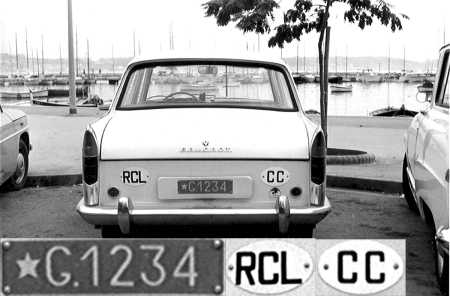 Here is a new concept by means of which we can liaise with each other at will, on any subjects we choose.    A mail system between members, starting from the RPWO web site.

The (WordPress-hosted) Europlate Blog site can also be set to allow non-members to read our correspondence and to contribute comments if they please.    We might derive useful information or images from exposing our odd hobby to others!

Entries to a blog are kept permanently, in date order, enabling subjects to be re-visited if required – say, before adding new information.

This entry was posted on Tuesday, August 10th, 2010 at 9:48 pm and is filed under Congo, Consular, Historic. You can follow any responses to this entry through the RSS 2.0 feed. You can leave a response, or trackback from your own site.

2 Responses to Use the new EUROPLATE BLOG (TEHA)