French possessions in the 1940s

To see a car from Senegal, in Britain, in about 1950, would have been a big slice of luck.   Here is John Pemberton’s sighting, on an Austin A40 Devon car – unusual to find in a French territory.

Can Francoplaque help to explain why the plate is ‘dark on light’, perhaps, as we think all were white on black then?

Note that it carries the light-alloy ‘F’ ‘oval’ which was so common in early times.   As Senegal was not independent until 1960, this car could have carried an ‘AOF’ oval, is it was part of Afrique Occidentale Francai 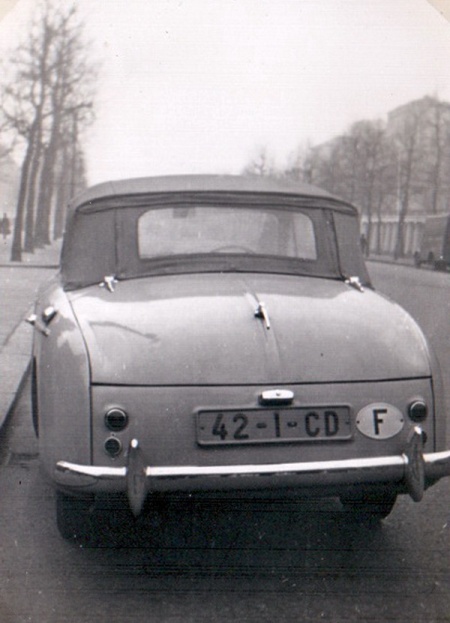 This early VW also carries the alloy ‘F’ sign, because its plate is from the pre-1956 independence, French Moroccan series – 1356 MA  15.

And concluding this foray into interesting French series, John captured a CD of an unknown type to me, carried on a rare Austin A40 Sports, made predominantly for the USA.

(Or is the car carrying the wrong international oval??)

This entry was posted on Saturday, January 19th, 2013 at 10:02 pm and is filed under Afrique Occidentale Francaise, Diplomatic, Historic, Morocco, Senegal, UNIDENTIFIED. You can follow any responses to this entry through the RSS 2.0 feed. You can leave a response, or trackback from your own site.

4 Responses to French possessions in the 1940s