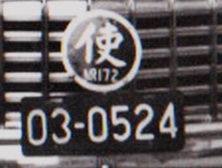 Further to the March 2013 Post  ‘Fancy a Chinese?‘  and the subsequent identification of the Chinese character on the shield, Alex Kavka sends the Blog the Chinese ideogram for ‘ambassador’, on his Taiwan diplomatic photo 359.    It is the same as that of the current PRC diplomatic corps (not necessarily ambassador)  ideogram 01-718 and another 1972-4 Taiwanese dip. 1 50 also shows the same character.       (from ‘RG’.)

Shown below are the examples from both countries, for comparison…   (Top, RC (current),  centre, PRC,  bottom, RC historic)

This entry was posted on Saturday, January 19th, 2013 at 9:34 pm and is filed under Ancient & Modern, China, Diplomatic, Historic, Taiwan. You can follow any responses to this entry through the RSS 2.0 feed. You can leave a response, or trackback from your own site.

5 Responses to CD symbol on Chinese and Taiwanese plates