I wonder if any members can beat this 1947 date for their first photograph of a foreign plate at the start of their hobby?     John Pemberton saw this Canadian car in Oxford when at university there  after the war and its quite a good picture for the time – perhaps a decent camera?             (66 years ago!!!!)

unknown car type from 1947 British Columbia, thanks to EU83!

Is it not odd that John’s sighting of another Canadian was made to mount a British Temporary Visitors’ plate?    After all, Canada was surely a signatory to the appropriate conventions?      Thierry?

1971 in Montreal.    The Quebec Liberation Group, allied to the Austin Owner’s Club Provisional Wing, had some unofficial ‘Q’ ovals made, possibly to assist them to get privileged parking…. 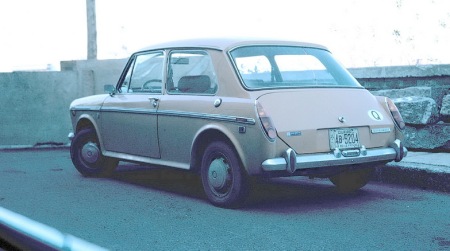 The journal Old Motor (now extinct) gives us this image of a Quebecois Dealer plate, probably from publicity pictures taken by the bus’ body-builder, before delivery to the purchaser and its regular registration. 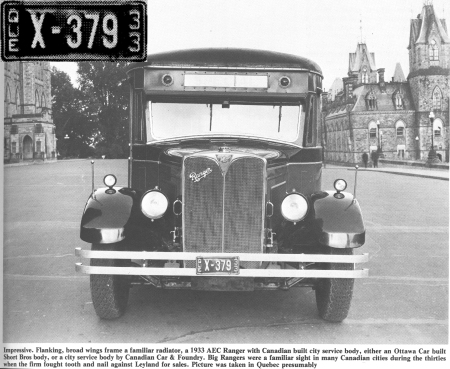 … The now-defunct but much-respected old vehicle journal in England, Old Motor, depicted this shot of an AEC bus in Québec in 1933, and it shows an X prefix, which is not noted elsewhere.     Could ‘X’ have been a code for service/city buses?  (now see John weeks’ reply.)

Until the 1970s, British vehicles were very popular in Canada, even though US factories had plants there, building several brands of tough US models.    A visit by the writer in the 1970s reminds of some common British makes in service then – an Austin 1300 (named Austin America for export to North America) and the bigger Austin 1800 (dubbed The Land-Crab) with a Vauxhall Vict0r, consecutively registered in Ottawa, Ontario. 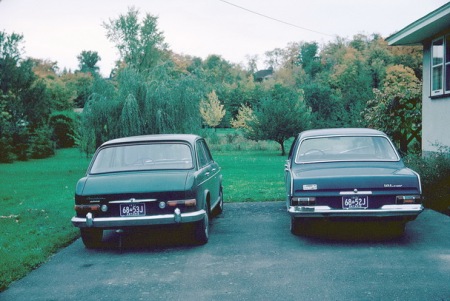 This Austin America carried a ‘Q’ international oval, to display the owner’s pride in his province and perhaps his wish to secede from Greater Canada, the better to develop the bizarre patois of the ancient French language, which the Québecois have made their own..

British Commer lorries were represented in Canada, as this 1954 photo shows of a Government vehicle in Ontario – where the small ‘C’ stood for Cargo (or Carrier (or Commercial) vehicle).    Several interpretations worldwide of the letter!

The things they tell us!

A Volkswagen 1600 Fastback parked in Kensington, London, during the early 1970s, carried this very peculiar plate (upper photo), with yellow digits on a black – or blue – ground.     (My photo was in black and white and age has done the rest!)

As seems to have been the way, the more interesting the plate spotted, the worse my photos became.    I have plenty of beautifully-exposed commonplace plate pictures, but for anywhere odd, I was lucky if the image even developed!

Days later, when passing 26-12515, and wondering again, where it may have come from, the driver approached the car, giving me the opportunity to lay the mystery to rest!       However, he became  extremely jittery when asked what must have seemed a sensitive question to him –  and, pressed by this newshound, he  finally uttered the word “Afghanistan” as he drove off with a squeal of rubber.      (If VW1600s had the power to make their rubber squeal.)

Well, of course, I didn’t believe him then and I  still don’t, but as the years have passed, I have wondered whether the (properly stamped-out) plate might have been a form of out-of-state Chinese issue, from province 26 – Ningxia-Hui (Yinchuan) – unlikely though it would have been then – or even now.    Compare a standard PRC plate of the period:

My London sighting used a different font and much smaller plates than the Chinese design – not much bigger in fact, than an Italian or early Libyan front plate.     I expect that it would tie up that the authoritarian 1970s Chinese would not permit a car to exit PRC carrying its numberplates, even for a foreigner allowed in temporarily under some scheme, so it is reasonable to imagine the replacement plates could have been made up simply to travel out of the country – and the originals handed in, as in Japan.

(This theorem was blown out of the water by Johnathan Moore and John Melby in their Comments below!)

23 May 2013;  Now, borrowed from  Google for illustration only, is the un-cropped Alabama 1970 plate design which finally allowed the recognition of the ‘Afghan’ mystery;

The entire Alabama  tag using a characteristic dash and font, akin to the queried Afghan 26-12515.

(Final question to the US xeno-autonumerologists:

Did Alabama stretch to five numerals after the dash separator?)